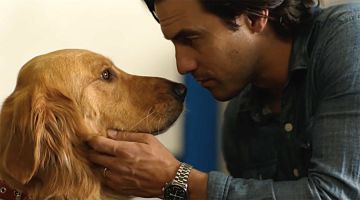 “The Art of Racing in the Rain” is a new family drama starring Kevin Costner as the voice of Enzo the dog and Milo Ventimiglia and Amanda Seyfried as his owners. It’s based on a best-selling 2008 novel from author Garth Stein.

On my recent trip to LA, I attended an advance screening of “Art of Racing”. Right after the screening was a Q&A with moderator Pete Hammond, film critic for Deadline, and Neal H. Moritz, a producer on the movie.

Moritz has produced the majority of the “Fast and the Furious” franchise (though, interestingly, not this week’s “Hobbs & Shaw”). He was also a producer on the “Jump Street” films, “Sweet Home Alabama”, “Click”, “The Green Hornet” and “Evan Almighty”.

However, right out of the gate at “Art of Racing”’s post-screening Q&A, Moritz declared that this is “the favorite movie I’ve ever done”. He later added that it’s “the most rewarding movie” out of the more than 60 that he’s been a part of.

When the book was released, Moritz was making the 2008 rom-com “Made of Honor” with “Grey’s Anatomy” actor Patrick Dempsey. Dempsey, who’s been a longtime race car driver, told Moritz about “Art of Racing”. And following the novel’s instant success (it first sold at Starbucks locations), Moritz soon began pitching a film version to studios. 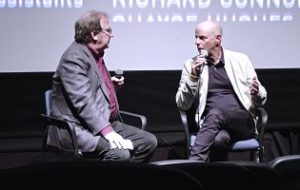 Over the course of the past decade, it was first at Universal, then Disney, then Sony and finally Fox (which is now owned by Disney). Also during that time, there was a chance that Costner may have wanted to direct the movie. But when that fell through, Moritz still hoped he could voice Enzo. Costner agreed, and as Moritz directly told me during the Audience Q&A portion, Costner recorded his lines over about five days. “And he was known as One Take Kevin,” Mortiz said.

Dempsey was originally considered for Ventimiglia’s role of race car driver Denny. But as the years went by, Moritz and director Simon Curtis (“My Week with Marilyn”, “Woman in Gold”) sought someone younger. Ventimiglia fits the part well. But his “This is Us” TV schedule meant that production had to be underway nine weeks after the film was finally greenlit by Fox.

Dogs had to be trained and actors had to be put in place. As for the dogs, Parker and Butler, two rescues were the main ones used for Enzo. And according to Moritz, there’s not a trace of CGI: “There’s nothing in the movie that the dogs didn’t do.”

The “Art of Racing” screening I attended was the first regular, critic and public showing of the movie to date. But months before most films are released, studios like to hold test screenings to see if select audience members like the way things turned out, or if things need to be changed. Moritz said that the LA test screenings of “Art of Racing” were among the top 2-3% of those he’s ever seen. Then, he decided to take the movie to rural America – specifically Kansas City – and play it there. And those numbers were very high as well.

I have a feeling that even with a crowded August at the multiplex, “The Art of Racing in the Rain” is going to quickly find its audience resonate with moviegoers of all ages. Look for My Review next Monday, August 5th, at 8pmET.