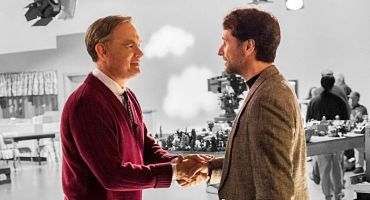 One of the most highly-anticipated movies of the rest of the year is “A Beautiful Day in the Neighborhood” (out Nov. 22). Tom Hanks plays Fred Rogers, and Matthew Rhys (“The Americans”) is journalist Lloyd Vogel, who meets Rogers and writes an article about him in the late ’90s.

That character is inspired by real-life journalist, Tom Junod, who wrote the Esquire piece on Rogers “Can You Say Hero?” that was published in 1998. In April, I talked with Junod about “A Beautiful Day”. He shares what it was like to visit the set, see Rhys as (essentially) him – and Hanks as the TV icon.

LCJ: How did you first find out that what you wrote was going to be turned into a movie?

TJ: I got a call from the two screenwriters back in 2015, who told me what they were interested in doing. And I went out to California to meet with them. And we met for about two days. It was kind of wonderful. I have to say, though, that… when you’re in the business that I’m in, you get feelers all the time. You get people sort of asking, “Would you be interested in selling this article?” And a lot of times those initial overtures don’t amount to anything, and that just happens.

LCJ: To me, Tom Hanks playing Mr. Rogers is fantastic casting. Do you feel the same way?

TJ: I think that it is genius casting. That’s when the movie really really became real to me. I had no idea what was going to become of it. I read the script. I consulted on the script. I worked with Micah and the producers. But it wasn’t until (producer) Peter Saraf called me up and told me that the movie had been cast – and had been cast with Tom Hanks – when it became very real to me.

LCJ: Were you on set? Did you see some of the scenes being shot?

TJ: Yeah. I went on set three times (in summer & fall 2018). I went to Pittsburgh twice, once to meet Matthew Rhys, who’s playing the character of the journalist. And the other times to meet Matthew and Tom. That was really wonderful.

LCJ: When you’re watching Tom and Matthew (filming scenes), does it bring back memories for you? Does it feel awkward in any way?

TJ: When I went to the set, I kind of went not expecting very much because the character (of Lloyd) is somewhat based on me but most of the things that happen in the script to him didn’t really happen to me. A lot of the stuff that happens between him and Fred is quite genuine. But… (Lloyd’s) life story is really not mine. So I didn’t really expect much. And then I went to the set, and I see Matthew and I see the way he’s dressed. He’s dressed exactly as I dressed in 1998. And that’s when it really hit me. The set was created with incredible verisimilitude. It was an incredibly faithful replica of the Family Communications set where Fred’s show was shot. Once I saw Matthew and once I saw Tom Hanks, I definitely was quite moved and taken by the whole thing. It really hit me then.

LCJ: And the director is Marielle Heller, who did last year’s “Can You Ever Forgive Me?”, which was a very unique story as well.

TJ: I got the feeling that Marielle really cares. You can kind of tell by the kind of projects she’s interested in. I don’t think she’s gonna be doing another “Avengers” movie anytime soon. She seems to be very, very interested in smaller and very, very personal movies where people show their vulnerabilities and therefore their humanity. That seems to be her signature. I’m really happy to be part of that.

LCJ: The film was originally going to be called “You Are My Friend”. Do you like that the title was changed to “A Beautiful Day in the Neighborhood”.

TJ: I like the title. It really goes back to iconography. I don’t think that if you’re doing a movie about Fred Rogers, you should look at the title and wonder what it’s about. There are enough phrases that ring the bell in people to take advantage of that when you’re doing a movie title. “You Are My Friend” could be any kind of movie, really, whereas “A Beautiful Day in the Neighborhood” is very, very specific to Fred. And I think that’s the way to go.

LCJ: I agree with you completely.

TJ: There’s something that’s really genuine… And the thing that’s really genuine about it is that this person, Fred Rogers, saw something in me and responded to that and tried to bring that out in me through friendship and through caring. I think that… if I had to get a message across to anybody, that would be the message I would like to get across. He was quite real and quite genuine and ministered to people on a beautiful and personal level. He was that guy.