A relationship thriller with such an intriguing title should be filled with deception, mystery and a quality twist or two. Unfortunately, this film has none of those elements.

Ian McKellen and Helen Mirren. Helen Mirren and Ian McKellen. Whichever way you bill it, these two acclaimed actors are at the center of this desperate and disappointing drama from veteran director Bill Condon.

Roy and Betty chat on an online senior dating service. Following their initial meeting at a London restaurant, we learn Roy isn’t exactly who he says he is. Turns out he’s a professional con man – and Betty is his latest target. She’s a rich widow who quickly falls for Roy’s act. Her grandson, who pops-up practically every time the two are together, is much more suspicious. 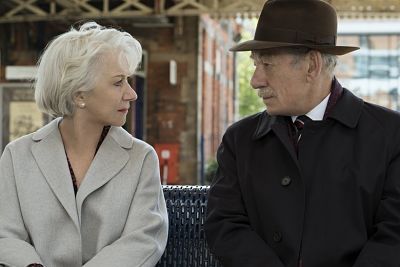 The only thing that keeps you mildly interested in how it all ends is the work of Mirren and McKellen. But even they can’t overcome a narrative way too dependent on things that “only happen in the movies”.

With about a half-hour to go there’s an over-calculated, highly specific and eye-rolling worthy swerve that shifts the entire tone from amusing guilty pleasure to depressing melodrama.

The fact that “The Good Liar” is based on a novel is no surprise. On the page, writers can conjure-up whatever means necessary to keep you flipping. But for the screen, a story has to be tighter and much more believable. Too much of this adaptation doesn’t pass that test.

True, I’m not exactly the target demo – and won’t be for another 50 years. But quality filmmaking has no age limits. Everyone who buys a ticket to “The Good Liar” (even with a senior discount) will feel a little conned.

On The Official LCJ Report Card, “The Good Liar” gets a D+.