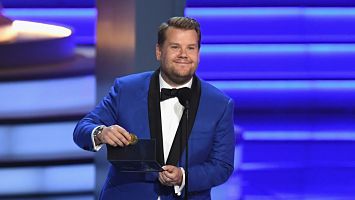 James Corden returns to host the Tony Awards this Sunday on CBS. Corden previously emceed in 2016 – to 8.7 million viewers. That’s the highest-rated Tonys telecast of the past 17. CBS is clearly hoping their “Late Late Show” funnyman delivers the goods once again.

But it might be an uphill battle to get back to that number. This year’s nominees don’t seem to have a mega attraction factor. Musicals “Beetlejuice” and “Tootsie” are of course based on classic films, but neither are projected to win the top prize.

Bryan Cranston, Jeff Daniels and Adam Driver are up for Best Actor in a Play. Driver’s “Burn This” is a Best Revival of a Play nominee, but both Cranston’s “Network” and Daniels’ “To Kill a Mockingbird” (a Broadway box office juggernaut) were surprisingly left off the Best Play ballot.

A Best Musical snub: “The Cher Show”, which is only up for three total honors. Best Actress in a Play contenders include Annette Bening, Janet McTeer and Laurie Metcalf. Though when it comes to overall star power, that seems to be where things end. Most of the other nominees, in Play and Musical categories, are familiar names and faces to those who love Broadway shows – but not the majority of America.

And how come there are only two nominees for Best Revival of a Musical? Unless it was just a low-count year in that department, I sense The American Theatre Wing will follow a similar path that The Academy did when only two songs were up for that Oscar category in 2012.

So, I’m sure Corden is working hard to put together viral-worthy, memorable bits (maybe with the likes of Cher). But will people care enough to tune in live or wait until the next day online? It’s a question that has faced many awards shows over the years – maybe none more so than the Big Apple-central Tonys.