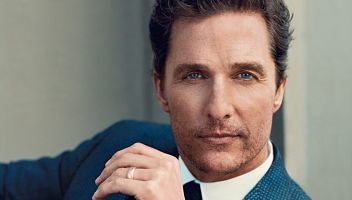 As I watched Michael Strahan interview Oscars presenter Matthew McConaughey on the red carpet Sunday Night, a thought crossed my mind: I think McConaughey would make a pretty good Oscar host. Here’s why:

1.) He’s a Previous Oscar Winner.
He knows how Awards Season goes and how this specific show runs, following his win for 2013’s “Dallas Buyers Club” and a memorable acceptance speech. He presented Best Actress the next year to Julianne Moore (“Still Alice”) and was back on stage this year presenting Film Editing.

2.) He’s a Storyteller.
His acceptance speeches throughout that awards season were “alright, alright, alright” – extravagant and a little out there (telescopes, Neptune, etc.), but they all made sense. And during them, McConaughey made relatable comments and remarks on life, balancing humor and seriousness quite nicely. He doesn’t need to do jokes or a grand production number. Instead, because he knows so many people in the industry, specific recollections of the year’s nominees, with the usual McConaughey spin and style, would work great in the opening segment.

3.) He Can Ad-Lib… and Hold Your Attention.
I always wonder what McConaughey is going to say or do next whenever he’s being interviewed or on stage. At the 2014 Emmys, McConaughey co-presented with “True Detective” co-star Woody Harrelson. But before handing out the award, he told a quick, funny anecdote about working with Woody… pulling everyone in… right to the punchline… no teleprompter required.

4.) He’s a Classy Dresser.
McConaughey is still considered by many to be one of Hollywood’s sexiest men alive, reflecting not only his physical appearance, but his overall, positive persona: how he acts, speaks and looks – always dressed to the nines.

5.) He’s A True Movie Star.
These days, the idea of a “true movie star” is only reserved for a handful of people. But all of McConaughey’s qualities, along with bringing-in big bucks at the box office and delivering one-of-a-kind dramatic performances, make him true movie-star material.

6.) Those Car Commercials
If McConaughey rolled onto the Oscar stage driving a Lincoln, it would make for quite a moment. There could also be some spoofs of those ads throughout the show. Lots of potential.