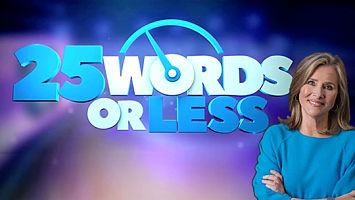 In 2002, “The View” moderator and “60 Minutes” journalist Meredith Vieira stepped into a pretty big position, becoming the host of the new daytime version of “Who Wants to Be A Millionaire?” After three years in primetime, ABC decided to shift the show to syndication in mornings and afternoons. Regis Philbin didn’t want to continue on with the game show under that structure (with “Live” and other projects going on).

So Vieira was chosen to fill some big shoes. In 2005, she became only the second woman to win the Daytime Emmy Award for Outstanding Game Show Host. (Betty White was the first, for the short-lived “Just Men!” in 1983). Vieira won her second Emmy for “Millionaire” in 2009, and she wrapped-up her 11-year run with the series in Summer 2013.

Six years later, Vieira is returning to the game show world as host of the brand new “25 Words or Less”. Produced by FOX, “25” had a trial run in select stations in Summer 2018. A few months later, the network announced that it would be in nationwide syndication beginning in Fall 2019.

“25 Words or Less” is adapted from a popular party game. And from the outskirts, it seems similar to both “Hollywood Game Night” and “Celebrity Name Game”, both of which have earned hosts Jane Lynch and Craig Ferguson, respectively, two Emmys.

What also makes “25” is interesting is that in some markets around the country (including mine in Upstate NY), it’s coming into a timeslot previously held by “Millionaire”, which Disney-ABC cancelled earlier this year. Vieira has been a longtime TV fixture, so fans of hers (and “Millionaire”) will definitely check out “25” when it debuts this week.

But even with a winning host, you need a game that works and has long-term appeal. Here’s hoping “25 Words or Less” becomes the next great daytime game show. Check your local listings for times.