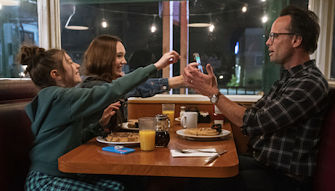 In an era where scripted streaming shows seem to attract the most television attention, network programs can still have an impact. Case in point: the new CBS comedy series “The Unicorn”. From co-creators and writers Bill Martin and Mike Schiff (“3rd Rock from the Sun”) comes a show about a widower looking to get back out there.

Walton Goggins is quite likable as Wade. His wife Jill died a year ago, so he’s had to take care of daughters Natalie and Grace on his own. But friends have pitched in, including the many who made Wade hundreds of frozen meals over the past year.

When all that food finally runs out, Wade faces the fact that Jill is really gone. A couple of couples (played by Rob Corddry & Michaela Watkins and Omar Benson Miller & Maya Lynne Robinson) think it’s time for Wade to start dating again. A number of moms (including those at the soccer games he refs) think he’s highly attractive.

So, why is the show called “The Unicorn”? Well, once Wade sets-up his online dating profile, he immediately starts getting notifications from women interested in dating him. Because he included the fact that’s he a widowed dad on his profile, Wade has become “The Unicorn” – “the elusive creature all single women are looking for.”

The opening section of “The Unicorn” Pilot episode are packed with chuckle-worthy laughs. The humor is realistic and, for the most part, grounded. Once Wade explores whether he feels up for dating again, the script shifts into a more thoughtful tone. One of Wade’s daughters doesn’t want to anyone to replace their mom. And Wade himself doesn’t want anyone to feel sorry for him just because his wife died.

Goggins’ Wade reminds me of a modern Danny Tanner. “Full House” struggled with similar themes during its eight-year run, and like that show, “The Unicorn” is able to tackle them honestly.

Smart casting also helps. Besides Goggins, his two daughters (played by Ruby Jay and Makenzie Moss) come-off as authentic – restrained rather than precocious. And Corddry’s character is one of his least annoying ever.

“The Unicorn” isn’t squeaky clean (frankly, what network show these days is?) but its sincerity comes through loud and clear. It’s been a while since I’ve felt this confident in a comedy series to think that it could really stick around. CBS, you’ve got a winner.

“The Unicorn” premieres this Thursday, September 26th at 8:30pmET on CBS.