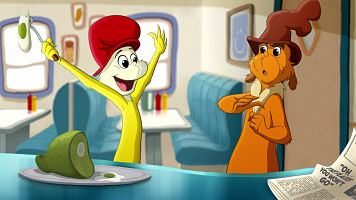 Nearly 60 years after it was first published, the classic Dr. Seuss work “Green Eggs and Ham” is now a Netflix animated series. Executive produced by Ellen DeGeneres, it aims to reach the same level of success on the streaming service as “The Cat in the Hat Knows A Lot About That!” over on PBS.

But the two aren’t exactly going after the same audience. “Green Eggs” has colorful characters and positive themes – and each of the 13 episodes has a one-word title. But this isn’t designed to be a learning program for young kids. Teens and adults will actually get more out of the dialogue and situations.

That’s because the show, developed by Jared Stern (writer of “The LEGO Batman Movie”), is structured more like a live-action comedy than an animated series. Even the intro and theme song (“Back Flip”) give you that vibe.

Two-time Oscar winner Michael Douglas hasn’t done much voice work in his career. But if the genre of animation formed into a human being, it would ask Douglas, “Where have you been all my life?” He is simply perfect as Guy Am I, a struggling inventor in the town of Glurfsburg. After a pitch for his latest creation goes awry, he takes his sorrows to a diner. There he meets Sam I Am (voiced by “Modern Family” and “Jexi” actor Adam Devine). He’s Guy’s polar opposite: plucky and uber-positive. This scene is the highlight of the first episode (called “Here”).

DeGeneres’ good friend (and “Finding Dory” co-star) Diane Keaton voices Miss Shelley, the mom to 10-year-old E.B. Their story intersects with Sam & Guy in the second half of the second episode. Keegan-Michael Key voices the narrator, and he doesn’t just do Seuss rhymes. He adds enthusiasm and reactions. I like his self-awareness because he delivers the lines well.

Random signage & labeling, and some of the references and remarks from supporting characters, don’t quite hit the mark. And it seems like Eddie Izzard is getting typecast… in animation. On the heels of his turn as the evil (?) hunter in DreamWorks’ “Abominable”, he’s yet another one in this adventure.

Still, the folks at WB Animation should be proud of “Green Eggs and Ham”. It uses the delicious title food wisely, and the first two episodes set the stage for a promising season with feature-film quality.