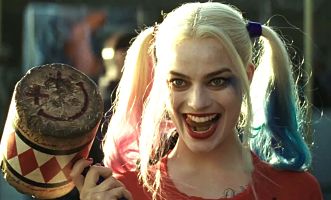 At the halfway mark of 2016, I wrote about my 10 favorite performances of the year thus far. Now, as we make our way into the final quarter of 2016, here are the 8 breakout supporting/minor performances (varying in length and across the genre spectrum) from seven actors and…a bird:

Chris Hemsworth, “Ghostbusters” – The ladies were funny, but Hemsworth, as the not-so-bright receptionist, entertained me the most.

Nicki Minaj, “Barbershop: The Next Cut” – One of the film’s biggest surprises, the singing superstar can actually act, holding her own with Ice Cube and Common in the comedy threequel.

Margot Robbie, “Suicide Squad” – Maybe the biggest “Scene Stealer” example of the year to date, Robbie electrifies the otherwise dull superhero action film as Harley Quinn. She’s already getting her own spinoff film, and I wouldn’t be surprised if Warner Bros. campaigns her in the Best Supporting Actress race.

Sully “Steven” Seagull, “The Shallows” – If you’ve seen this shark attack thriller, you know that the two main characters are played by Blake Lively and…an actual seagull that she performs surgery on and becomes her companion.

Wanda Sykes, “Bad Moms” – The comedienne is only in one scene, as a therapist, but it’s the funniest in the entire movie.

Alfre Woodard, “Captain America: Civil War” – Also a single scene appearance, Woodard captivates as a grieving mother who (verbally) attacks Tony Stark. Forget all the action, this was the most intense moment in “Cap 3” (though I’m probably the only one who will ever admit that).