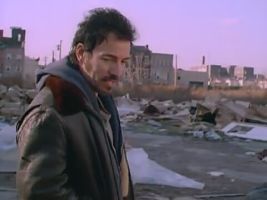 The new movie “Blinded by the Light” is inspired by the music of Bruce Springsteen. With its release next Friday (with early nationwide preview screenings on Monday night), here’s a look at the prior cinematic contributions of The Boss:

“PHILADELPHIA” (1993)
Springsteen’s “Streets of Philadelphia” won him the Best Original Song Academy Award. “This is the first song I ever wrote for a motion picture,” he said during his acceptance speech. “So I guess it’s all downhill from here. You do your best work, and you hope that it pulls out the best in your audience – that some piece of it spills over into the real world and into people’s everyday lives.”

“HIGH FIDELITY” (2000)
The singing superstar made a memorable cameo appearance as himself in a scene with star John Cusack.

“THE WRESTLER” (2008)
The title song from this Mickey Rourke/Marisa Tomei drama won Springsteen the Original Song Critics Choice and Golden Globe Awards, but he was snubbed on the Oscar ballot.

“RICKI AND THE FLASH” (2015)
Meryl Streep’s rock singer character performed Springsteen’s “My Love Will Not Let You Down” in the final scene.

“THUNDER ROAD” (2016, 2018)
The ’16 short from filmmaker and actor Jim Cummings won the Short Film Grand Jury Prize at the Sundance Film Festival. In the months after the win, Cummings wrote The Boss a letter, asking for the digital rights to the song to allow the short to be posted online on Vimeo. Within days, Cummings’ request was granted by Springsteen and his representatives. Cummings then turned the concept of “Thunder Road” into a feature-length movie, which was released online last year.