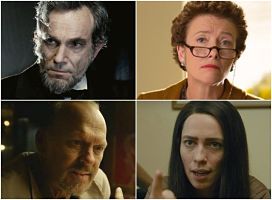 A decade of motion pictures has come to a close. Looking back, it was a chunk of time filled with dominant, memorable, immersive and truly moving performances. But four stood out to me above the rest:

DANIEL DAY-LEWIS – “LINCOLN”
Taking on a U.S. President is challenging enough. But arguably the greatest living actor taking on arguably the greatest U.S. President (under the supervision of one of the greatest living directors) – that’s a lot of pressure. From the moment the first image of Day-Lewis as our 16th Commander in Chief was released, he was a lock to WIN the Best Actor Academy Award. Then we got to experience his dynamite, powerful, all-timer performance. He also became the first actor in a Steven Spielberg movie to win an Oscar.

REBECCA HALL – “CHRISTINE”
The most overlooked performance of the four is in this tremendous indie drama. Hall played Christine Chubbuck, a local, 1970s TV news reporter who shot herself on live television and died shortly thereafter. Hall portrayed Chubbuck as an emotionally unstable, determined yet unsure woman who just wanted to feel loved – in one of the most competitive industries out there. It’s a gut-wrenching, everlasting performance.

MICHAEL KEATON – “BIRDMAN”
In my favorite film of the decade, Keaton soared to new heights as film actor Riggan Thomson, looking to make a splash on Broadway. Alejandro G. Inarritu’s one-take dramedy is fun, daring and beautifully haunting. Keaton is the driving force behind the film’s constant movement, precision timing and perfect execution. It’s a once-in-a-lifetime role in a breathtaking film that simply can never be duplicated.

EMMA THOMPSON – “SAVING MR. BANKS”
I grew up with “Mary Poppins”. It’s one of my favorite movies. Some people couldn’t wait for the latest “Star Wars” and “Avengers” installments over this decade. My anticipation levels were that high for 2013’s “Saving Mr. Banks” and 2018’s “Mary Poppins Returns”. Emily Blunt, who played the practically perfect nanny in “MPR”, had one of the most difficult jobs of any actor or actress this decade – and she pulled it off delightfully. But Thompson’s character of “Poppins” author P.L. Travers in “Banks” spoke to me on a more personal level. She’s a rigid, highly emotional and misunderstood woman who greatly values her work… and has a lot of personal baggage (in the form of connections to the “Poppins” characters and her real life). There are quiet moments of Thompson in “Banks” that are simply awe-inspiring.