Blue Sky Studios, the animation company behind the “Ice Age” franchise and “Rio”, has been around for more than 30 years. It started releasing feature films in 2002. From 2011-2017 Blue Sky opened a movie a year, through distributor 20th Century Fox. But since the release of “Ferdinand” in 2017, a lot has changed at Fox and Blue Sky. The biggest change? Both are now properties of the vast Disney empire.

Blue Sky’s latest, “Spies in Disguise” was delayed multiple times until finally given a Christmas Day 2019 release date. The film is clearly the edgiest movie the studio has ever made.

This is a slick, high-octane animated action comedy – and a far cry from the studio’s soft, warm-hearted “Horton Hears a Who!” and “The Peanuts Movie”. “Spies” just doesn’t feel like a traditional Blue Sky movie – but rather something DreamWorks or Sony would make. This shift in overall tone may be the only way Blue Sky can (potentially) survive under the supervision of The Mouse.

Lance Sterling (voiced by Will Smith) is the world’s top secret agent (just ask him!) Walter, a young, scientific genius on his team, has some inventive ideas that could help Sterling be an even better spy. But the ego-centric agent ignores Walter’s suggestions… until he no longer can. When a mad-man begins using Sterling’s face as his own in order to wreak havoc upon the world, Sterling has to put his trust in Walter (Tom Holland). He provides Sterling with a disguise, turning him into a pigeon. 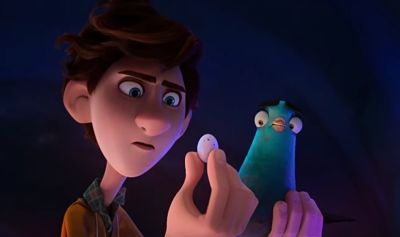 “Spies” is based on an animated short, “Pigeon: Impossible” (which is actually a much better title). Bird and human must work together on a global mission to stop the diabolical face-switcher.

As he’s already done this year with “Aladdin” and “Gemini Man”, Smith elevates the material with his voice performance (the lip-to-voice matching is also quite good). But “Spies in Disguise” suffers from an ultimately generic and kid-centric screenplay, which includes a lot of goofy action, silly dialogue and annoying slow-motion.

The spy mantra does offer some cool visuals. And Oscar-winner Mark Ronson’s score (he co-wrote “A Star Is Born”’s “Shallow”) is welcome. But the themes and antics are way too basic and predictable. We’ve seen this all before in recent spy genre animated offerings, including “Penguins of Madagascar” and “Cars 2”.

“Spies” isn’t unwatchable. But with all the intelligence agents on the creative side of this project, it’s a mystery why smarter decisions weren’t made that would’ve resulted in a much more entertaining finished product.

On The Official LCJ Report Card, “Spies in Disguise” gets a C+.