In 2016, Ron Howard directed an insightful look at one of the most iconic bands in history with “The Beatles: Eight Days a Week – The Touring Years”. Now Howard returns to the music doc genre, this time focusing on world-renowned opera singer Luciano Pavarotti.

At just under two hours, “Pavarotti” is one of the longest documentary features in recent memory. You’d think that would mean the film is filled with juicy, fascinating, revealing material about the legendary tenor. And while there is some of that in “Pavarotti”, there’s also something missing.

If, like me, you know very little about Pavarotti before seeing this documentary, you’ll certainly walk out having learned a great deal about this consummate performer and international superstar. He did it all quite humbly. He was charming and very generous to his friends (from Placido Domingo to Bono to Princess Diana) and complete strangers, particularly children in need.

Many of the clips, such as Pavarotti performing as a member of The 3 Tenors, his talk show appearances and starring in commercials, are quite entertaining. Interviews with family members and colleagues done for this film provide a defining sense of who Pavarotti truly was. The singer died in 2007 at the age of 71 from pancreatic cancer. 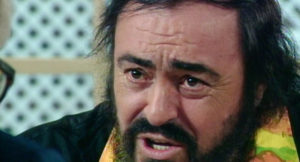 However, this is very linear storytelling. The film jumps right into Pavarotti as a young adult, following in the footsteps (vocal chords?) of his father, who was a tenor at their church in Modena, Italy. We only get a few briefly glimpses into his childhood, and hints at what inspired and motivated him, throughout the rest of the movie.

Howard uses subtitles and informational graphics during excerpts from some of Pavarotti’s great operatic performances. These are helpful for those not fluent in Italian.

This is a 100% celebratory documentary. For most of the movie Howard only hints at the singer’s possible infidelities. Pavarotti’s late-in-life affair with a woman half his age, which produced a child and ended his marriage, is unavoidable. This was highly scandalous back in 2000. From today’s perspective, it was all pretty tame.

The best moments of “Pavarotti”, by far, are the performances. It’s impossible not to be mesmerized watching this musical genius and listening to his God-given gift.

This is a tribute film and definitely worth seeing if you’re a fan. But in an era when the strongest documentaries have a point of view and things to say on multiple levels, “Pavarotti” fails to hit those notes. Overall, for a film that showcases one of the most powerful singing voices of all-time, “Pavarotti” lacks power.

On The Official LCJ Report Card, “Pavarotti” gets a B.