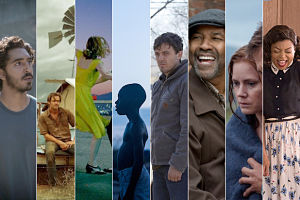 Amy Adams is a five-time Oscar nominee. In a wide-open race she potentially could’ve won the Best Actress award this year for sci-fi thriller “Arrival”. But she’s been left-out of the years most unpredictable category, and is easily the Biggest Snub of the 2017 Oscar nominations. “Arrival” received 8 nominations overall, including Best Picture and Best Director – Denis Villeneuve.

Streep’s co-star Hugh Grant is NOT a Best Supporting Actor nominee. Lucas Hedges (“Manchester by the Sea”) took his slot. And Golden Globe winner Aaron Taylor-Johnson is also not on the ballot, replaced by his “Nocturnal Animals” co-star Michael Shannon.

“Sing Street” failed to receive an Original Song nomination, but I’m glad Sting’s powerful “The Empty Chair” from “Jim: The James Foley Story” is in the category. “Suicide Squad” is one of the three Makeup & Hairstyling nominees – “Deadpool” was expected to be in that race, but it didn’t selected, and was completely shut-out.