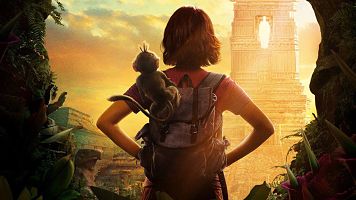 Next weekend’s “Dora and the Lost City of Gold” sees Paramount and Nickelodeon once again putting a spin one of their popular cartoons. This “Dora” is a live-action, CGI adventure – not hand-drawn animation like the TV series.

There have been several Nick animated shows that have been adapted into theatrical features. In 1998, the “Rugrats” first hit the big screen, returning for “Rugrats in Paris: The Movie” in 2000. “Hey Arnold! The Movie” and “The Wild Thornberrys Movie” opened in 2002. “Rugrats Go Wild”, which combined two sets of characters, came out in ’03.

And then… there was SpongeBob. His first feature film adventure was in 2004 and earned more than $32 million in its first weekend. The next Nick adaptation wouldn’t be until 2010’s live-action “The Last Airbender” (based on the “Avatar” series). Director M. Night Shyamalan and the film were almost unanimously panned by critics and audiences. And in 2015, SB returned for hand-drawn, live-action and CGI combo “Sponge Out of Water”.

But just as many of the Nick movie projects have been films that became TV series. 2001’s “Jimmy Neutron: Boy Genius” was released before “The Adventures of Jimmy Neutron” TV show. The film was one of the original three nominated for the Best Animated Feature Oscar, along with “Monsters, Inc.” and winner, “Shrek”.

2006’s “Barnyard” ushered in the hilarious TV spinoff “Back at the Barnyard”. Nick co-distributed the live-action “Teenage Mutant Ninja Turtles” movies in the midst of not one, but two different TMNT animated series. And “Wonder Park”, released this Spring, will lead into an upcoming program.

On the way after “Dora”: a third “SpongeBob” film, “It’s a Wonderful Sponge”, which will reportedly be a partial prequel… that also leads into an upcoming spinoff series, “Kamp Koral”. And in the age of reboots, “Rugrats” will return to theaters with a live-action/CGI 2021 effort.