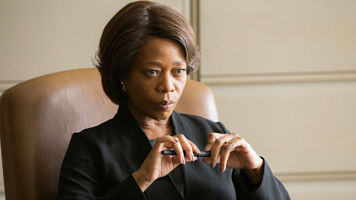 Here’s my mini-review roundup: Thoughts on four films I saw over the weekend. All are aiming for big awards season play:

Alfre Woodard stars as longtime Death Row prison warden Bernadine Williams. Aldis Hodge (“Brian Banks”) has served 15 years for a murder he still insists he didn’t commit. The opening sequence (a lethal injection execution) is dramatically detailed and shocking. From that point to the chilling final scene, writer/director Chinoye Chukwu confines you to Bernadine’s world – and you’re just as trapped as she and her inmates are. Not every scene in “Clemency” is a 10, but every moment matters. This is a movie that makes you feel things — anger, discomfort, shock. But there’s no temptation to take your eyes off the screen. And Woodard deserves most of the credit, thanks to an incredible performance in a challenging role. If enough voters see her work she’ll be an awards season player.

Shia LaBeouf wrote this screenplay based on his life as a child actor (on Disney Channel’s “Even Stevens”) and, more recently, in rehab. What makes the experience unique for us, and LaBeouf, is that he plays his abusive father. Noah Jupe (“A Quiet Place”) does a nice job as the young Otis (Shia changed his name and some other details). Lucas Hedges plays the older Otis. At times, “Honey Boy” is a little too self-aware and LaBeouf’s performance does get theatrically extreme (lots of screaming, swearing and destructive behavior). But the script carries emotional weight, and is revealing about the life of a child actor who wanted to be a child.

This is Pedro Almodovar’s autobiographical look at autobiographical filmmaking. Antonio Banderas gives a delicate, moving performance as film director Salvador Mallo. He’s had plenty of health issues throughout his life and isn’t motivated to direct anymore. But his childhood and past experiences re-enter the picture and change everything. The tone is fairly light in the first half – until a major story shift. Eventually “Pain and Glory” ends-up being three-to-four movies wrapped into one. Relationships (with his mom, friends, lovers, drugs and cinema) build, and so does our attachment to Salvador. The final act is quite unexpected and satisfying. This will be an International Film and Lead Actor contender.

Noah Baumbach has contributed some quality films (“While We’re Young”, “The Meyerowitz Stories”, writing on “Madagascar 3” and “Fantastic Mr. Fox”). But this uber-silly dramaedy on the break-up of a marriage is a highly unpleasant experience. Scarlett Johansson and Adam Driver play the parents of eight-year-old Henry, who’s at the center of their separation and divorce proceedings. The script is overly cute, self-centered, way too preachy and lacks anything fresh. The characters (including a LA lawyer played by Laura Dern) are painfully annoying, and most of the situations are flat-out ridiculous. Plus, there’s a completely out of place Randy Newman score. Johansson and Driver are getting Lead Actress and Actor Oscar buzz. If they end up on that stage in four months, it will be for two of the most overblown performances of the year. Just because “celebrity divorces” are common doesn’t make them entertaining. This is a highly personal/semi-autobiographical project for Baumbach. He should have kept it to himself.