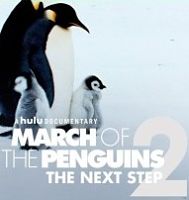 “Meet the remarkable Emperor Penguin… again.” That is narrator Morgan Freeman’s opening line from “March of the Penguins 2: The Next Step”, the follow-up to 2005’s groundbreaking, Oscar-winning nature documentary. This is a sequel we never knew we needed.

I saw the original “March” at a crowded theater during the height of its theatrical run in the summer of ’05 and was completely blown away by the footage and the storytelling. The film brought the nature doc genre to a mainstream audience (it’s still the box office leader, grossing over $127M worldwide). It also inspired a sea of followers from studios such as Warner Bros. & IMAX (some of them also narrated by Freeman), the BBC, and, in particular, Disneynature.

So, more than a dozen years after the release of the most celebrated and successful nature documentary of all-time, how could a sequel live up to all that? By sticking to a winning formula, while taking advantage of major advances in technology over the past decade.

Director Luc Jacquet returns, venturing back to Antarctica to chronicle the story of an Emperor and Empress as they mate and raise a baby chick, born into an unpredictable, ever-changing world. Jacquet utilized 4K cameras, drones and under-ice diving to capture every move these creatures make. And it’s all amazing to witness.

While Jacquet revisits the death-defying, -50-degree environment of the original, he advances the story by focussing on the chick, who faces 10-1 odds just to survive his first year, and then must learn to “march” on his own.

The visuals of “March of the Penguins 2” are stunning, both in clarity and composition. The film will not be shown in theaters (it’s a Hulu exclusive), but trust me, even on a laptop the viewing experience is breathtaking.

Extreme close-ups enhance the intensity level. And the ability of the 5-person crew to capture every sound – from the subtle cracking of an egg to the unique call of the Emperor as he tries to locate his missing son – is beyond remarkable.

There is drama and danger in just about every scene. As was the case with the original, “March 2” is an immersive and emotional experience. Thankfully, Jacquet keeps the climate change updates to a minimum (though they are alarming), preventing the film from becoming too preachy. Freeman (who with this work officially earns the title of Greatest Narrator of All-Time) does warn us that the Emperor penguin could become extinct before the end of the century.

Even with a runtime of just over an hour, “March 2” does drag slightly in the final act. And there is a bit too much slow-motion throughout. But, overall, this a tremendous achievement and a must-see for fans of the original or anyone who appreciates documentary filmmaking at the highest level.

On The Official LCJ Report Card, “March of the Penguins 2: The Next Step” gets a B+.