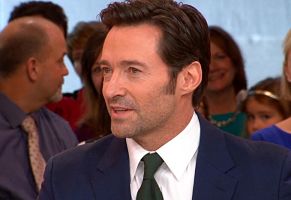 The release of “Logan” marks star Hugh Jackman’s final film as Wolverine…for now. Jackman has played the X-Men icon nine times – seven installments as the lead character and two franchise cameo appearances (“X-Men: First Class” and “X-Men: Apocalypse”). So, will Hugh be able to survive without his cinematic alter ego – and what have his roles been like outside of this series so far?:

THE OTHER FRANCHISE THAT COULD’VE BEEN
2004 saw Jackman step away from Wolverine and into the role of Van Helsing, alongside “Underworld”‘s Kate Beckinsale. The 2-hour, 10-minute action/horror film made $300 million worldwide, but a sequel was not pursued.

THE VOICE
Jackman voiced characters in two animated films that were both released in November 2006, “Flushed Away” (for DreamWorks and Aardman) and Warner Bros.’ “Happy Feet”, which won the Best Animated Feature Oscar. He returned to DWA for 2012’s “Rise of the Guardians” as the Easter Bunny and will once again lend his voice for the studio with next year’s “Larrikins” – an Australia-set musical.

TURNED DOWN
Jackman turned down roles in two recent releases. He was originally set to reunite with his “Australia” co-star Nicole Kidman to play Saroo Brierly’s adoptive father in “Lion” (though the dad role wasn’t nearly as “showy” as the mom). Jackman was also going to take on Will Smith’s down-on-his-luck ad man role in “Collateral Beauty”.

AWARDS ATTENTION
Jackman starred in 2013’s “Prisoners”, with Jake Gyllenhaal, Viola Davis, Maria Bello, Paul Dano, Melissa Leo and Terrence Howard. While it was a standout (for some) early on that awards season, it quickly lost momentum, only earning an Oscar nom for Cinematography.

One year earlier, Jackman took home a Golden Globe and received an Academy Award nomination for the musical “Les Miserables”. If “Lincoln” (starring Daniel Day-Lewis) was not released that year, I truly believe Jackman would have won the Oscar.

On Christmas Day, we’ll see him take on ringmaster P.T. Barnum in “The Greatest Showman on Earth” – a role that Jackman likely hopes will lead him to Best Actor glory. But with such glowing reviews for “Logan”, could we see a campaign for his final Wolverine outing as well?

It’s a tough call, as he could easily fall into the trap of Cate Blanchett (Best Actress Oscar nom for “Carol”, ignored for “Truth”) and Amy Adams (snubbed by The Academy for both “Arrival” and “Nocturnal Animals”). And since both “Logan” and “Showman” are being distributed by 20th Century Fox, the studio likely won’t want to see Jackman competing against himself. However, him becoming a double Critics Choice Award nominee (Best Actor and Best Actor in an Action Movie) is not out of the question.