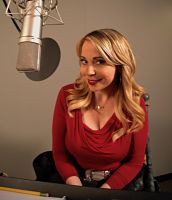 She’s the voice of Timmy Turner, Raven on “Teen Titans Go!” (and in the upcoming movie) and now Rocky on Amazon Prime Video’s “The Adventures of Rocky and Bullwinkle”. Tara Strong joins me on this episode of The LCJ Q&A Podcast.

So far in 2018, 4-time Oscar winning “Wallace & Gromit” creator Nick Park and “People NOW” host Jeremy Parsons have joined LCJ, along with both the star and writer/director of the critically-acclaimed film “Eighth Grade” – Elsie Fisher and Bo Burnham.