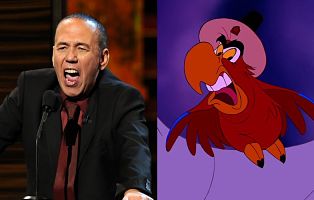 In this Jackson Murphy Interview on the popular animation website, comedy icon Gilbert Gottfried reflects on 25 years since “Aladdin”, including voicing his character, Iago the Parrot, and if he’ll return for the upcoming live-action version. Plus, Gottfried discusses the documentary “Life, Animated” and the upcoming “Animal Crackers”.

LCJ appears every Friday morning on WGNA-FM . His movie reviews are also posted on his website, his YouTube channel and the popular website Cultjer.com. He is also a contributing writer for Jerry Beck’s AnimationScoop.com. Jackson hosts the weekly internet pop culture news show “LCJ LIVE” (every Sunday at Noon ET). And “The LCJ Q&A Podcast” features interviews with celebrities and filmmakers. Among those who have joined LCJ on the show are comedy legend Gilbert Gottfried, “Wallace & Gromit” creator Nick Park, Emmy-winning game show host Todd Newton and Oscar-winning screenwriter Diablo Cody.