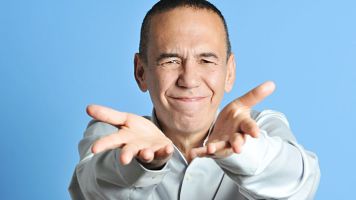 On the latest episode of The LCJ Q&A Podcast, comedy icon Gilbert Gottfried joins me as we run through some of the highlights of his career, from voicing Iago in “Aladdin” to getting fired by Donald Trump on “The Celebrity Apprentice”. He also discusses his new documentary, “Gilbert”, and reveals whether Disney has asked him to return for their upcoming “Aladdin” remake.

LCJ appears every Friday morning on WGNA-FM . His movie reviews are also posted on his website, his YouTube channel and the popular website Cultjer.com. He is also a contributing writer for Jerry Beck’s AnimationScoop.com. Jackson hosts the weekly internet pop culture news show “LCJ LIVE” (every Sunday at Noon ET). And “The LCJ Q&A Podcast” features interviews with celebrities and filmmakers. Among those who have joined LCJ on the show are comedy legend Gilbert Gottfried, “Wallace & Gromit” creator Nick Park, Emmy-winning game show host Todd Newton and Oscar-winning screenwriter Diablo Cody.