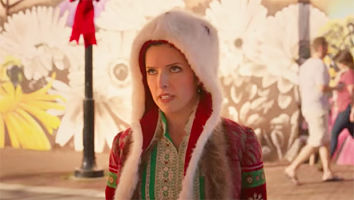 G ratings are rare these days for big studio releases. In fact, they’ve mostly been awarded to two categories of films: documentaries and Disney animated movies.

So far in 2019, only three major releases have been given G ratings: “Toy Story 4”, the Disneynature doc “Penguins” and NEON’s “Apollo 11”.

The last sufficient year of G movies was 2011, with 11, including “Cars 2” (which I still argue should’ve been PG), “Winnie the Pooh” and… “Justin Bieber: Never Say Never”. But there were only four in 2010. And you have to go all the way back to 2009 for “Hannah Montana: The Movie”, which was the last live-action Walt Disney Pictures film to be rated G by the MPAA.

Until now. Holiday flick “Noelle”, starring Anna Kendrick and Bill Hader, debuts on the brand new Disney+ streaming service on Nov. 12. It was originally supposed to open in theaters on November 8th, but the Mouse House pulled it and decided to put it on Disney+ instead. “Noelle” has received a G rating, marking the first live-action Walt Disney Pictures film to get this distinction in 10 and a half years.

All those live-action remakes, re-treads and reboots of Disney classics (“Alice in Wonderland”, “Beauty and the Beast”, “Aladdin”, “The Lion King”, “Dumbo”, etc.) have been PG. Their original versions were G. But that transition to live-action can offer up some “scary action” and “thematic material” that warrants a PG instead. It doesn’t seem like “Noelle” has any of that.

The MPAA has not yet rated the new “Lady and the Tramp”, but if it is G and not PG, it will be “the most family friendly” of all the entries in the modern Disney remake catalogue.

Does a G mean that “Noelle” is too safe or tame? Interestingly, the first (and best) “Santa Clause” is PG, but the two sequels are G.

No matter the rating, Disney certainly hopes that millions of families ring in the holidays with “Noelle”. If it’s a lump of coal, Disney+ will not get off to a flying start.