There’s little chance you haven’t heard something about the behind the scenes drama surrounding “Cats”, the film adaptation of the beloved Broadway musical. The A-list actors, singers and even a talk show host — including Idris Elba, Judi Dench, Ian McKellen, Taylor Swift and James Corden — went to “cat school” and performed their scenes using motion capture technology. All their fur is CGI. Some of the tech tricks had never been used in a movie before.

The internet went a bit batty when the first trailer was released over the summer. Yes, at first glance, the human-cat combo characters are odd. And additional footage released over the past few months only added to the negative vibe surrounding the production.

Early in December the musical-loving Hollywood Foreign Press Association members screened an unfinished version of “Cats” but only gave it one Golden Globe nomination (for Best Original Song). And then news broke that Oscar winning “King’s Speech” and “Les Miserables” director Tom Hooper had to work 36 hours straight to complete the final edit in time for the premiere on December 16th.

But even with all these potential red flags, I still went into “Cats” with an open mind. Some musicals, such as 2017’s “The Greatest Showman”, have only moderate pre-release buzz but turn out to be become phenomenons. Unfortunately, “Cats” isn’t one of them (though, in a way, it’s its own three-ring circus).

With some razor sharp editing, story reconstruction and casting changes, “Cats” – the movie – could have worked. It just would’ve likely taken Hooper another two years. There are a handful of moments that glisten like a film version of a great musical should: Jennifer Hudson singing “Memory”. Jason Derulo’s abstract but tolerable cat-tune. Dench’s surprising epilogue. And Ballet dancer Francesca Hayward, in her film debut, is wonderful as Victoria. This is a demanding role for Hayward, who is practically on the move the entire time. She is up to the challenge.

But the rest of “Cats” is a sourpuss experience. And somewhat surprisingly, the look of the characters is the least of this film’s problems. The proportions of the human-sized felines in relation to the sets and scenery is very odd. But what’s even more disappointing is the narrative — or lack of one. There’s practically no character development or plot development. And therefore the audience isn’t given the chance to really know the players or care about their situations. 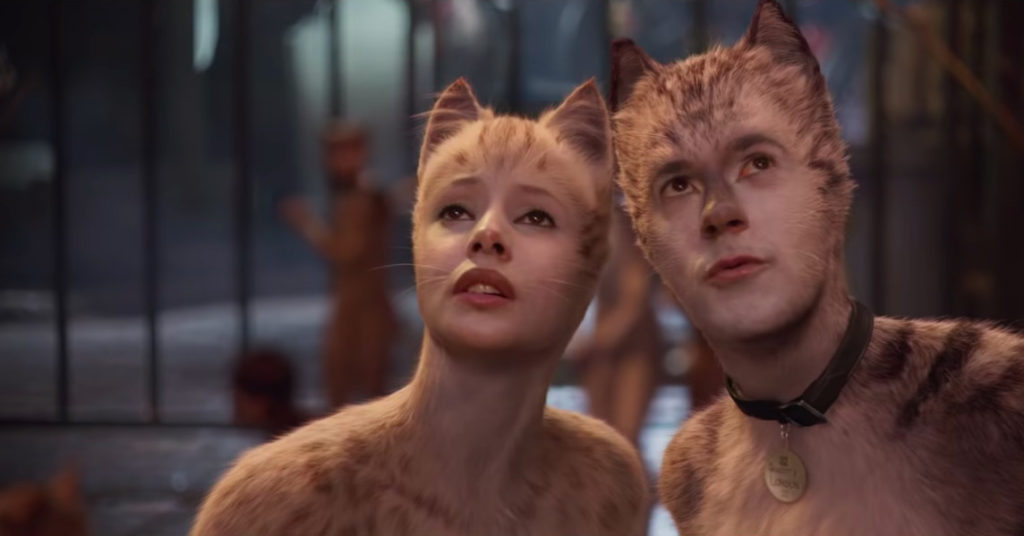 The entire storyline takes place over one night. And it’s a special night.  Once a year Dench’s queen cat (let’s just call her that) gets to choose which neighborhood cat gets to start over — begin another life in a better, brighter world. Each cat contender performs for the judge (think “Britain’s Got Talent – Kitty Edition”). And we get to watch all of them. The film goes from one song, by/about a specific cat, to another and another and another.

The musical productions blend together so quickly that, at times, “Cats” is more like an opera — a really  bland opera. There is a five-minute dance break midway through – a Broadway staple, but not smart for the screen (but at least there was a break from the singing).

The list of cast members most out of place begins with Corden and Rebel Wilson. Their spotlight scenes are back-to-back early on. The uncomfortable moments and failed attempts at humor do not help get things off on the right paw. Elba isn’t far behind. He plays the villainous cat who has unexplained magical powers (even though he’s not the magician cat — that’s another character). Diehard Swifties have to sit through more than an hour before she shows-up for one song. Bizarrely, it’s NOT the Golden Globe nominated song she co-wrote with Cats-master Andrew Lloyd Webber. Hayward actually sings “Beautiful Ghosts” in the film. Swift’s version is played over the closing credits.

“Cats” won’t make you want to claw your eyes out, but it is a bit of a head-scratcher. In the end, Hooper (who succeeded tremendously with the risks taken in “Les Mis”) was simply way too ambitious. If directors, like cats, have nine lives, Hooper just used one up.

On The Official LCJ Report Card, “Cats” gets a C-.