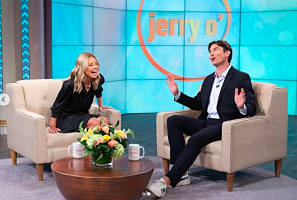 When the folks at “Live” were looking for someone to take over for Regis Philbin after his departure in 2011… (notice I use the words “take over” and “departure”, not “replace” and “retirement”)… a number of people auditioned. The frontrunners included Anderson Cooper, Neil Patrick Harris, Seth Meyers and Jerry O’Connell. Ultimately, Michael Strahan got the gig (and then controversially exited a few short years later).

After watching all these guys from late ’11 to Summer 2012, my pick for the person who deserved to be with Kelly Ripa every morning was O’Connell. His fun, upbeat, positive energy matched well with Ripa. And then when Strahan left, O’Connell did some more co-hosting with Ripa – and he was once again passed over, this time for Ryan Seacrest. O’Connell told Larry King last year, “I would’ve loved it.”

But O’Connell was in the midst of his own talk show path. He has been a guest on “The Wendy Williams Show” many times over the years, including on Halloween 2017, appearing just minutes before Williams fainted live on-air after becoming over-heated in her costume.

“The first thing I see when I [get] backstage is Jerry O’Connell in tighty whities,” Williams said the next day on her show. O’Connell had done a bit on that Halloween episode. “I love him so much, and he’s like ‘Is there anything I can do to help?’”

In March 2018, O’Connell became the show’s first-ever guest host, doing a week-long stint. He filled-in again earlier this year. And in March, it was announced that he would be getting a three-week trial run of his own daytime talk show.

“Jerry O’” is produced by Funny or Die and Debmar-Mercury. It kicked off on Monday the 12th (with Ripa as the first guest) and will air through Friday the 30th in 16 top markets around the country during Wendy’s timeslot on FOX stations. For those who don’t live in cities such as New York, Los Angeles, Chicago, Philadelphia or Atlanta, all the full episodes are posted daily on Jerry O’Connell’s YouTube channel.

“Jerry O’” is filmed in Wendy’s NYC studio. It’s shot live to air on Mon-Thu, with the Friday show done “live to tape”; pre-recorded on Thursday afternoon. On Thursday, I attended the afternoon taping of Friday’s show.

It was an energized talk show experience. Unlike many shows I’ve attended, I give the “Wendy”/“Jerry O’” crew credit for having a vending machine filled with snacks and water available in the waiting room. About an hour later, once upstairs in the studio, the DJ and funny warm-up guy got the audience (around 120 women and about a half dozen guys) moving.

O’Connell, who I’ve met on two occasions, including in January at the LA premiere of his animated “Reign of the Superman”, looked very comfortable and proud during the hour. His strengths: bubbly impersonations and reactions, ad-libbing without being excessive and personal stories about working in the industry.

The episode opened with a brief, chuckle-worthy dressing room bit (that “Funny or Die” influence), followed by a couple segments of O’Connell discussing “Hot Topics”. It mirrors what Williams does, which I guess is the intention… for now.

The “surprise guest” section with Andy Cohen was recorded earlier in the week. The latter third of the episode included a pole dancing segment with a popular social media star. When the segment was over, O’Connell commented to audience members in the front row, “I thought I was gonna have a heart attack.” There was also a celebrity “Kiss List” game with audience members that went very smoothly.

If “Jerry O’” does well, this will likely lead to O’Connell’s daytime talker becoming permanent starting in September 2020. Whether it will be directly paired with “Wendy”, or re-structured altogether, is unclear. I’m rooting for O’Connell, who’s very likable and is certainly not a rookie when it comes to live television.