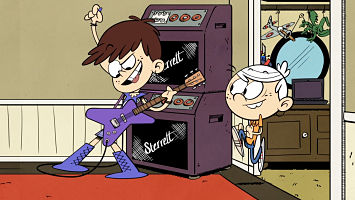 Check out My Animation Scoop Q&A with Michelle Lewis and Doug Rockwell, the songwriters of the new “Loud House” special, “Really Loud Music”. It debuts Friday November 23rd at 7pmET on Nickelodeon.

LCJ’s movie reviews can be found on his website, his YouTube channel and the popular website Cultjer.com. He is also a contributing writer for Jerry Beck’s AnimationScoop.com. Jackson hosts the weekly internet pop culture news show “LCJ LIVE” (every Sunday at Noon ET). And “The LCJ Q&A Podcast” features interviews with celebrities and filmmakers. Among those who have joined LCJ on the show are comedy legend Gilbert Gottfried, “Wallace & Gromit” creator Nick Park, Emmy-winning game show host Todd Newton and Oscar-winning screenwriter Diablo Cody.