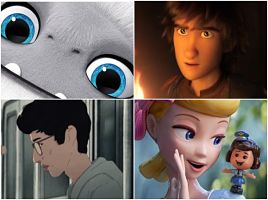 This year’s Best Animated Feature race is fairly wide open. Major animation houses Disney, Pixar, DreamWorks, Laika and newcomer Netflix are represented among the nominees for the Best Animated Feature Critics Choice Award. The prize will be handed out during the 3-hour live ceremony Sunday January 12th at 7pmET on The CW.

Among the six nominees are “Frozen II”. If it wins, it will become the first animated franchise to have its original installment and first sequel both win the category. Another nominee is “Missing Link”, from stop-motion studio Laika. This marks a five-for-five streak, with “Coraline”, “ParaNorman”, “The Boxtrolls” and “Kubo and the Two Strings” also nominated in the past.

DreamWorks has two entries on the ballot this year. One is “Abominable”, from writer/director Jill Culton. She’s the first woman to be the writer and director of a major, original animated feature. I interviewed Culton in September: “This movie is so dear to me. It’s got a lot of personal elements of my life in it. It was a story that I felt like needed to be told. Sometimes stories hit you like that when you get the opportunity to tell them. I just thought the world needs to see this story. It’s got so many great messages to it and such a strong female lead – the likes that haven’t really experienced before.”

The second DreamWorks nominee is “How to Train Your Dragon: The Hidden World”. Here’s some of what director Dean DeBlois told me back in February: “I love stories where you have disparate characters that come together and have such a profound affect on each other for a short period. But even though they may part ways in the end, they will never be the same again. And this was our opportunity to honor that particular story theme and to really bring our trilogy to a close in a conclusive, emotional and hopefully very satisfying way.”

Netflix enters the animation arena with the innovative “I Lost My Body”. Director Jeremy Clapin recently discussed with me his intentions with a unique concept: “There are two stories, in fact, in one story in this film. There is the story of the hand trying to reach its buddy, but also Naoufel trying to get closer to Gabrielle. This is a love story. I choose – because the main things really capture my attention – the situation of this hand and what it can tell about humans. And at the end… I have to decide which subject is my film.”

And finally, Pixar has brought us the chapter we didn’t think we needed, “Toy Story 4”. In June, Head of Story Valerie LaPointe let me know that it’s been quite an experience for her: “I think it’s been strange for me and for our story team because it’s been so personal to us for so long. I’ve literally worked on this film for five years. My first daughter was a baby when I started making it, and now she just finished Kindergarten. It’s been this long haul. We care so much about it – every tiny little detail and decision. There’s been a lot of excitement and energy and I’m just blown away about how well it’s being received and how everyone loves it. It’s a really great graduation, in a way. Five years of your life culminating.”