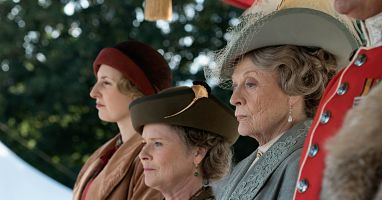 Americans have had an incredible fascination with the Brits. And it’s not just the Royal Family and baking shows anymore.

Look at “Downton Abbey”. The popular PBS program was a hit in the United Kingdom – but an even bigger success in the United States. Around 10 million people in North America watched “Downton” each week during the height of its run. It was such a phenomenon that Focus Features and the makers of the show decided to put together a motion picture.

The “Downton Abbey” movie has been No. 1 in the UK for the past three weeks, totaling the U.S. equivalent of $24 million to date. Currently, it’s the 13th biggest movie of the year – but it has quite a ways to go to make it into the Top 5.

In America, “Downton” was only No. 1 for a weekend, but it’s at $65 million and counting. It needs at least $83 million to become Focus Features’ biggest movie in the U.S. of all-time (not adjusted for inflation). Add on sequel and awards buzz (it could be a SAG Best Ensemble nominee).

Next, look at “Fleabag” – the BBC/Amazon comedy series that took the Primetime Emmys by surprise. It earned the Best Comedy Series honor that most thought would go to either “Veep” or “The Marvelous Mrs. Maisel”. “Fleabag”’s Phoebe Waller-Bridge also took home awards for writing and starring in the show. She’ll next be part of the latest installment in an iconic series starring a British character: James Bond. Waller-Bridge is one of the writers of “No Time to Die” with current 007 Daniel Craig, out in the spring.