Believe it or not, we’re already at the halfway mark of 2019. Out of all the new movies I saw that were released (in theaters or online) between January 1st and June 30th, here are my picks for the 10 Best:

“AMAZING GRACE”
The one-of-a-kind concert documentary re-affirms the fact that Aretha Franklin was an absolute gem.

“AVENGERS: ENDGAME”
Marvel and the Russo Brothers got it right with a highly satisfying send-off to some of our favorite superheroes.

“THE BOY BAND CON: THE LOU PEARLMAN STORY”
This is a gritty, thought-provoking doc on the music industry and a foul disruptor.

“EXTREMELY WICKED, SHOCKINGLY EVIL AND VILE”
Zac Efron captivates as Ted Bundy in an eerily fascinating look at the infamous trial and curtain-opening behind the scenes drama. 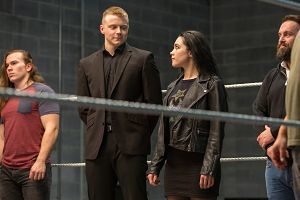 “FIGHTING WITH MY FAMILY”
It’s a criminally underrated inspired by a true story WWE dramedy with a terrific Florence Pugh and Vince Vaughn.

“HOW TO TRAIN YOUR DRAGON: THE HIDDEN WORLD”
DreamWorks’ epic franchise finale is a soaring conclusion to Hiccup, Toothless and the rest of the gang from the Island of Berk.

“STORM BOY”
This updated take on a classic Australian story is sweet, sentimental and at times stunning.

“TOY STORY 4”
Pixar pulled off what was thought to be impossible: a follow-up to “TS3” that is successful in nearly every way.

“WILD ROSE”
Music has the power to bring us together and reflect on our lives. Jessie Buckley and Julie Walters make for one of the best mother-daughter pairings in years.

“SERENITY”
Matthew McConaughey and Anne Hathaway’s thriller bombed at the box office and was largely panned, but you should really give it a chance and hopefully appreciate what it has to say.

“THE FAREWELL”
This PG-rated dramedy from A24 is one of my favorites of 2019 so far, but it doesn’t open until July 12th, so it cannot technically qualify as one of the best of the first half of the year.